It's been a long week.  I was out out on the road again with a trip to our sister company and just got back in time to head up to College Station for the first football game last  weekend.

With my job, I have the opportunity to travel a bit.  Not an obscene amount like in sales or service, but more than the average bear.  I get to travel to wild and exotic places like Manila or Hong Kong or Minneapolis or Buffalo or even Denver to meet with suppliers. Whenever I go, I take the opportunity to tour the sites and experience the area.  Hike the local paths, eat the local food, drink the local beer.  Life's a journey and sometimes we need to take time and enjoy the adventure.

Enjoy the mountain vistas (we don't have hills like these down in Houston). 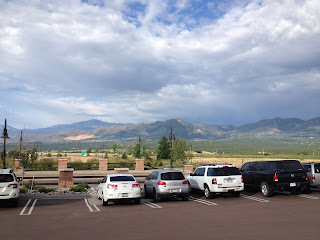 Enjoy a quaint local hotel near the academy 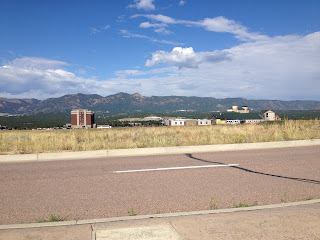 And have the opportunity to meet some really interesting people on the trail. 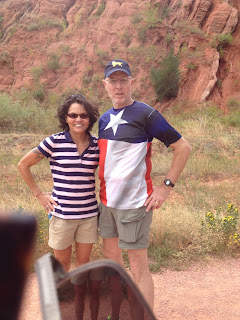 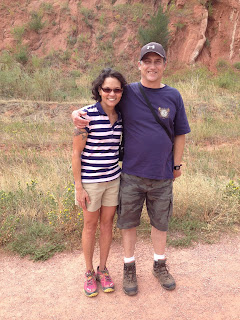 Yea, Abby already let that cat out of the bag.  Two weekends back, I flew up to Denver to spend a week at our sister division and I took an earlier flight up to make a side trip down to Colorado Springs for the weekend.  I thought, hey, while I'm cruising the Mile High State, why not pop down and try to see some old friends?  Not only does Abby rule the trails down in CS, but I sorta neglected to tell her that my old crazy roommate happens to live in the same town as she does.  Ya know, the George Clooney guy that dresses in a tux for a class reunion?  Well, like many trips I take, I tend to have an ulterior motive.  So I when I planned a trip down to CS to reminiscence over old war stories with my old roommate and, while in the area, have a chance to meet up with another interesting blog friend I have known/talked with for years. I spend Saturday evening having dinner with my friend and his wife and then planned to meet up with Abby on Sunday before heading back up to Denver.  I had originally proposed meeting her for coffee or lunch, but, after reading all of Shadowrun's adventures, I proposed something more energetic.  Too bad that the Incline had closed after Shadowrun had trekked up the trail, so we had to settle for something more sedate for this old flatlander.  I left the choice up to Abby, being the local guide and she chose the Red Rock Canyon as a good alternative.  I met up with Abby and Wolfgang for some hiking.  Wasn't sure that she would recognize me right away so I figured why not wear something obvious (or obnoxious).  Both Abby and Wolfgang were gracious trail guides hosts and we had a great time hiking all over the trails.  I've had the chance to meet a few of my blog friends over the past few years and I always jump at the chance to meet the brains behind the keyboard.  Abby is as funny and energetic as she sounds.  We had a blast hiking the trails and trying to cover a million different topics.  We were talking so much, that I sort of overlooked the trails and we certainly forgot to take any pictures.  The one at the end was our post hike, let's get lunch shot.  With the gathering storm clouds, I suggested lunch and we picked a local watering hole just a few miles down the road that serves some good local beer.  We had lunch at the Roundhouse and spent another hour talking about different things like the Olympics, Ryan Lochte, Airstreams, Dogs, floods, etc.  It was a great time but I had to head back up to Denver so we said goodbye and they headed back home while I drove around the Springs a bit more before heading north.  I am glad to have had the chance to meet up with them, if only for a short while.

I got up to Arvada to my hotel with no problems and set up to work at the plant.  The second day, when I got back from an morning run, I noted that there was some severe weather down in Colorado Springs and they were hammered by a ton of hail and flooding.  I texted Abby to check in with her and see if they were ok (thought it was ironic that we were talking about people getting flooded out in Louisiana at lunch on Sunday) and they were ok.  I also added that, out of all of the topics we covered, I forgot to talk about my roommate that I had dinner with on Saturday.  I made mention that he might be closer to her than I had originally imagined.  I even noted that I drove past a certain school crossing zone that looked mighty familiar near roomie's house, so they had to be close.  I noted, offhand, that she might have even seen him once or twice around the neighborhood cause he drove one of those unique 4 wheel drive military vehicles called a Unimog.  One of only a handful in Colorado.  Her response was epic - OMG - Your roommate is Unimog Guy?  I never really picture him as "Unimog Guy", but it fits.  Sorry - no pictures of the Unimog - was too dark when I had dinner with him.  Still, I found it amazing that Abby knew of him and how close they actually were.  Small world. 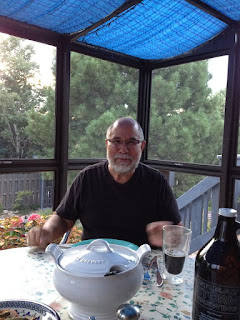 And what a nice meetup it was! It's just a shame that the incline had recently closed. Next time.

I still can't get over the small world and the fact that your college buddy roommate is Unimog Guy. When you said you thought you drove through my old crosswalk, I figured maybe you didn't realize the large number of school crossings in Colorado Springs. Now, I look at your photo of Unimog Guy. Cut down those evergreens, you might see my house!

I was so happy to hear you two were able to meet up! Sounds like you had a great day together. One day isn't enough though, is it? I felt that way when I met up with you, and all three times I met up with Abby. Guess it's good to always leave wanting more though, right?
I gotta ask... Did you take a pic FROM the quaint hotel near the Academy or OF the quaint hotel near the Academy. Because the hotel in the pic is one of my hotels and it's where the boys and I stayed when we visited.

Hope you enjoyed Colorado. Don't forget to head down to Pueblo on your next trip. The lake is worth the trip.

really nice and interesting post. i enjoy it so much.
scr888

คาสิโน,Thank you sir, this is a Fabulous article. Thanks for sharing with us. I learn many things from this article.

agg79
Too old to start over, too young to retire. On the backside of 55 and picking up steam. Married a long time. One son, one daughter-in-law. Two goofy Golden Retrievers. One old project car. One Airstream trailer.

CURRENT MOON
about the moon